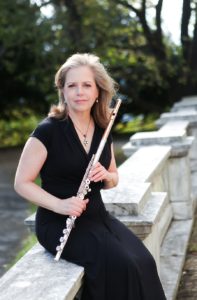 Elizabeth Brightbill held the position of Principal Flute with the Tulsa Philharmonic Orchestra and has performed with a number of other orchestras across the country, including the Alabama Symphony, the Fort Wayne Philharmonic, and the Britt and OK Mozart Festival orchestras.

A recipient of multiple awards, Elizabeth has been named a winner of the National Flute Association’s Dissertation Competition, semi-finalist in the NFA Young Artist Competition, and 2nd Runner-up in the Myrna Brown Young Artist Competition. Her artistic pursuits with Terra Voce include performance of traditional and multi-cultural musical styles on a copy of the 19th c. Rudall & Rose simple-system flute made by John Gallagher of Elkins, WV.

Elizabeth holds the Doctor of Music degree from Indiana University’s Jacobs School of Music and teaches at Longwood University and in her home studio. 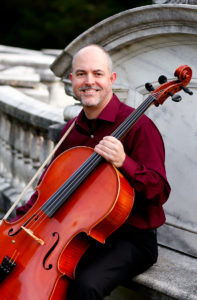 Andrew Gabbert surprises audiences with the depth of sounds and textures that he coaxes out of his cello. Prior to the creation of Terra Voce, he held titled positions with the Tulsa Philharmonic and Opera orchestras for eleven years. He has also performed as soloist with the Tulsa Philharmonic and the National Repertory Orchestra, and has recorded on Centaur Records as the Principal Cellist of the Chorus Civitas Orchestra. He has previously been a member of the Baton Rouge Symphony, National Repertory Orchestra and Terre Haute Symphony.

Summer festival appearances have included the Wintergreen (VA), Britt (OR) and Sunriver (OR) Festivals, the Texas Festival-Institute at Round Top (TX), and OK Mozart (OK) with the Solisti New York Orchestra. As a chamber musician, he regularly presented educational concerts as a member of the Tulsa Philharmonic String Quartet/Quintet.

Andrew has taught at Randolph College, Sweet Briar College, Lynchburg College, as a Visiting Instructor at the University of Oklahoma, and as a graduate assistant at Louisiana State University. He currently teaches at Mary Baldwin University, and maintains a private studio in Crozet and Charlottesville, VA.